Now offering roundtrip flights to anyone who can commit to volunteering on this program for two or more weeks. This offer is subject to availability and only applicable to those traveling within the US from participating airports. Apply to volunteer.

All Hands and Hearts has deployed assessment teams to the Northeast and is continuing to work with local communities to identify the areas of greatest need and how we may be able to best serve them. We are responding to the need in Louisiana by committing to a three month initial response program. We are currently accepting volunteer applications with an immediate start date. If you or someone you know is interested, apply for our Hurricane Ida Relief Program.

Hurricane Ida devastated Louisiana as a category 4 hurricane on August 29, 2021 before continuing to leave a path of destruction through the eastern coast of the United States. On September 1, Ida slammed the northeastern United States with record breaking rainfall causing historic flood levels in New York and New Jersey.

Category 4 Hurricane Ida made landfall over the Port Fourchon community in Louisiana at about 11:55 am CT on August 29, 2021 – the 16th anniversary of Hurricane Katrina. Ida was first observed as a tropical depression on August 26, after passing over Cuba as a category 1 hurricane, Ida underwent a rapid intensification, progressing to a category 4 hurricane by the time it made landfall in Louisiana.  Communities in Louisiana saw tropical storm conditions as early as Saturday evening and were hit by Ida on late Sunday evening, August 29, and into the morning of August 30. Wind speeds exceeding 150 mph were sustained for a total of 6 hours, twice the duration of the 125 mph sustained winds of Hurricane Katrina. There are over 2 million people who live in the affected area, and as of Monday morning, over 1.06 million are reported without power and over 18,000 people had already filed for federal aid.

While the levee system that protects New Orleans held during the hurricane, multiple towns outside its protection saw catastrophic flooding and storm surge. Fallen trees and debris litter the streets across Ida’s path. Homes are missing parts of their roofs, fallen trees lie on homes and roads, and some of the most devastated areas are still flooded and remain impassable.

All Hands and Heart stationed their Disaster Assessment and Response Team (DART) in Beaumont, Texas on August 27 in preparation for the storm and has already started moving towards the impacted areas to assess the damage and response needs. Two teams headed towards New Orleans along two different routes to cover more ground and gain a better understanding of the damage done by Ida. One team went west through Laplace and found widespread damage while the other team went east of Baton Rouge and found downed trees and potential roofs that needed tarping. Now stationed in Mandeville, DART has boots on the ground and is assessing the needs in the area. They have connected with the New Orleans VOAD (Voluntary Organizations Active in Disaster) to gain a better understanding of the needs in the communities and preliminary reports show that the parishes closest to the coast where the eyewall of Ida passed over were the hardest hit.

On September 2, additional members joined the team in New Orleans and deployed to the New Orleans metropolitan area to meet with partners and conduct initial assessments.

All Hands and Hearts is prioritizing the compounding risk of COVID-19 and is able to leverage its experience of running disaster relief programs throughout the pandemic. We will remain focused on supporting communities in need, both responsibly and safely. Due to the five named storms that made landfall in Louisiana in 2020, All Hands and Hearts has another team prepared to rapidly respond to Hurricane Ida. The Hurricane Laura Team was pulled back to the safety of San Antonio, Texas, in preparation for the storm. Now that it is safe, the team has returned to Dequincy and is prepared to provide any additional resources necessary to further respond to Ida.

On multiple fronts, we are prepared to respond immediately to Hurricane Ida and launch a program of volunteers and staff to support the impacts. We anticipate the initial need to include chainsaw work, roof tarping, mucking and gutting, and mold sanitizing.

Since Hurricane Katrina in 2005, All Hands and Hearts has responded to 4 major disasters in Louisiana, including our current response and recovery efforts in the aftermath of Hurricanes Laura and Delta that hit Southeast Louisiana just one year ago.

Give your support to the communities affected by Hurricane Ida and either make a donation or apply to be a volunteer. For the most up-to-date information follow our Hurricane Ida Tracker.

Images show the movement of Hurricane Ida as it made landfall on August 29, 2021.

Ida passed over the northeastern United States the evening of September 1, causing destructive tornadoes and historic levels of rainfall in areas which were already saturated by Hurricane Henri in late-August. In New York City, most city subway lines were suspended due to the flooding, and both New York and New Jersey declared a state of emergency. The rain was so extensive that for many parts of New York City, it is the first time in history that there has ever been a flash flood emergency warning.

We have an assessment team based in New York remotely assessing the situation as more information becomes available. As soon as it is safe to do so, we will be sending the team in to gather more information and connect with partners and the media. 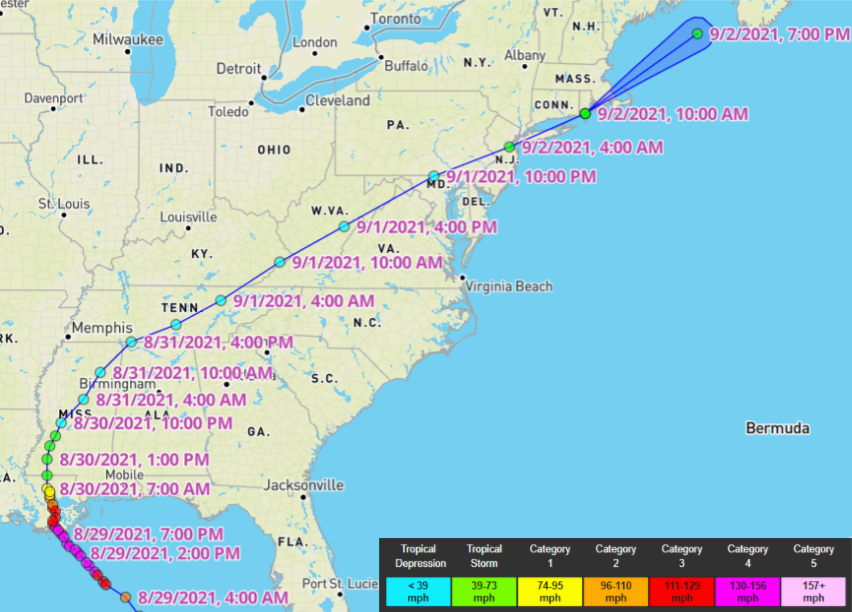 Review our COVID-19 Safety Measures & Updates to learn about the new operational standards we’re implementing on program to safeguard the people in the communities we serve, volunteers and staff.

At times like these, it’s important to be prepared. Check out our Hurricane Preparedness resource and take action to protect yourself and your loved ones.